Campus Events You Enjoyed Participating In and The Reason(s):
I enjoy participating in Homecoming and Viking Fest events because I get to hear from alums of the university about their experiences here at ECSU. I also like attending the student body meetings because you get to see students perform and share their talents.

Your words to live by:
Be the change that you wish to see!

Professors who have influenced you and why
Dr. Tarsha Rogers and Dr. Ebere Oriaku. These two professors, who are both committed to student success, encrouraged me to get involved and make a difference of campus.

Advice for younger students
Get involved on campus with different clubs, committees, organizations. Let your voice be heard!

“I worked under the supervision of superintendent, Dr. Catherine Edmonds and executive assistant, Ms. Kim Cooper,” said Boone. “I was tasked with implementing a Student Government Association in the district. My overall goal for the SGA was give students a voice, create transparent relationships, develop student leaders, and improve school and student engagement.”

Boone took on a big job over the summer, but the business administration major was up to the task. He says that as a former student in Bertie County, he enjoyed working with the school district’s leadership on this project.

“I believe my internship with Bertie County Schools was useful and worthwhile because I gained a lot of valuable knowledge,” Boone said.

It’s knowledge that Boone hopes to use when he pursues a future as a higher education administrator.

“I also take advantage of every opportunity that I receive to shadow administrators here at ECSU,” he said.

As a student growing up in Bertie County, Boone was no stranger to ECSU. The university is just a couple of counties away from his rural northeastern North Carolina home. But it was an open house on the ECSU campus that helped him make his decision to become a Viking.

“I knew that this is where I belonged,” said Boone. “Along with the affordability, the staff and students were so welcoming that I immediately fell in love with the university.”

Boone’s time at ECSU has been one he describes as positive and forward thinking, molding him into a leader. His activities on campus, the organizations he has joined, and the people at ECSU have all contributed, he says, to his growth here.

“Over the years I have met a lot of faculty and staff that committed to the success of the students and this institution,” said Boone. “I wouldn’t trade my student experience for any other school. I am proud to be a Viking!”

Being proud of his school, Boone sees opportunity for future Vikings. As the current freshman class settles into life on campus, representing the largest surge of new freshman in years, Boone has some advice for them.

“Don’t let ECSU make you, you make ECSU,” he said. “We all have something special to bring to the table. The student experience is what you make it. Get involved on campus with different clubs, committees, organizations. Let your voice be heard!” 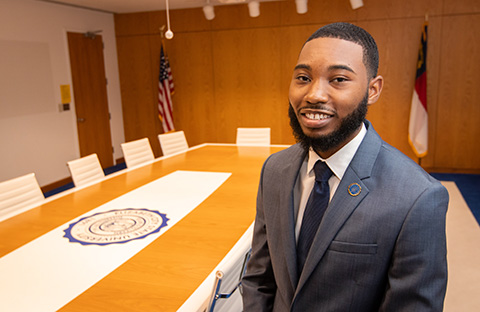