Campus Events You Enjoyed Participating In and The Reason(s):
Honors Program events (quiz bowl, debate, and ceremonies). The honors program has been very close in my heart because of the dedication they’ve shown to their students and the opportunities they provide us with.

Your words to live by:
“Be not simply good, be good for something”

Professors who have influenced me and why:

Dr. Kenneth E. Jones, my mentor in my personal journey who pushed me past the point I thought I was ready for. He taught me to fly, and then through me off and let me learn for myself.

Dr. Eric Weil, my academic hero, his classroom was the room I fell in love with literature in. From creative writing to academic he was there to lend an edit and provide praise and criticism as necessary. Future ECSU students are missing out on not having Dr. Weil.

Be yourself, go to class, and get your work done before you go out.

It was Zachary Singletary’s high school teacher, an Elizabeth City State University graduate, who encouraged the Roper, North Carolina native to become a Viking. But it was the 21-year-old senior’s experience early in his freshman year that convinced him, ECSU was the right place.

“About halfway through my first semester, no less than that, I was hooked,” said Singletary, an Honors Program student and Language, Literature and Communications (LLC) major. “It was meeting the people, the students. So many people trying to do well and good things were happening.”

Singletary grew up in Roper and it was during his senior year in high school that he was first introduced to ECSU. There was a course being given at his high school via Skype, from ECSU, which caught his attention. And then there was his teacher, Dwayne Brooks, an ECSU graduate, who encouraged Singletary to give Viking life a try.

Singletary will graduate this December. He says he’s very happy he made the decision to become a Viking, rather than head down the road to another university.

“I felt more comfortable here,” he said, referring to ECSU’s intimate environment where it’s easy to be a part of campus life. “And I think the professors are amazing here.”

Singletary began discovering just how amazing his professors were about the same time he was considering changing his major. Originally intent on majoring in mathematics and becoming a high school math teacher, Singletary says a pre-calculus course changed his mind, and the one-time chair of the LLC, Dr. Chantelle McPhee, told him perhaps English would be a good choice.

“I had a class with Dr. McPhee and wrote a paper for it,” recalled Singletary. “She said it was good and that I should consider switching to English.”

Singletary made the switch, and he never looked back. He says his love of American literature, coupled with his plans to pursue a Masters in English from ECU, will lead him to a career as a high school English teacher.

He was also invited by Dr. Kenneth E. Jones to join the ECSU Honors Program. That, says Singletary, was one of the best decisions he’s made during his stay here.

The program has given him the opportunity to participate in a number of academic activities, and Dr. Jones, he says, has made a marked difference in his education.

“The Honors Program has forced me to look at things differently,” said Singletary. “The professors bring what you learn in the classroom and show you how to apply it in real life.”

Although Singletary’s home is less than an hour’s drive from ECSU, he has chosen to spend his semesters as a resident. He heads home on the weekends where he works as a customer service clerk for a local supermarket, except when the Mighty Vikings are playing home games at Roebuck Stadium.

Singletary says campus life has been full of good memories, and life at ECSU is like one big family.

“Come and see ECSU,” he said. “Get to know the professors. It’s a unique opportunity and small and that helps. People really care. 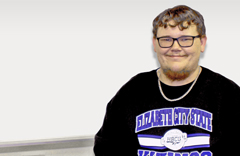