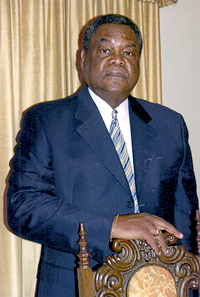 Bobby Riley and his family are passionate about education and providing opportunities for students in higher education. In the spring of 2013, Mr. Riley, a lifelong educator and graduate of the class of '66 in the Industrial Arts Program, made a planned gift of $25,000 to create a scholarship endowment to support Industrial Technology at Elizabeth City State University. Now a retired school administrator in Atlanta, Mr. Riley has received numerous leadership appointments for his involvement in Technology Education, to include; NASA's VIP Educator's Conference and the second launch of the Space Shuttle Challenger participant, President of the Georgia Industrial Technology Education Association, a delegate of the United States Educators for Science and Technology Education Exchange with educators in China, and a participant of the United States/China joint conference on education in Beijing.

In addition to his affinity for technology, Bobby maintains a commitment to the university as a whole and several other key areas, including athletics, through various means of support. He is a 1982 member of the Elizabeth City State University Sports' Hall of Fame, and has received numerous accolades for his service including; the Georgia-International Technology Education Association Teacher of the Year in (1988), the Outstanding Achievement in Education Award from the National Alumni Association at ECSU (1987), and the Distinguished Alumni Award from the National Association for Equal Opportunity in Higher Education (NAFEO). He is also a member of Epsilon Pi Tau International Honor Society for Technology Professionals and Omega Psi Phi Fraternity.

In 1978 the Director of Alumni Affairs at ECSU met with alumni members living in Atlanta. The group recommended that Bobby take the task for formulating a chapter. Mr. Riley agreed to contact alumni living in the Atlanta metro area, as well as the state. Their first meeting was held on April 9, 1978 at Bobby's home and the rest is history. Bobby continues to serve the Atlanta Metro Chapter as the current vice president. His dedication to service and to his university remains unwavering.

Bobby and his wife Sylvia, who is also a retired educator and is a graduate of Virginia State University, are pleased to support excellence in education at ECSU. The have one son, Bobby Lamont.

Bobby says, "I challenge my fellow Vikings, especially the 60's decade, to consider gift giving, especially a planned gift. The university invested in me from 1962-66, therefore I am blessed to give back and help some deserving students."