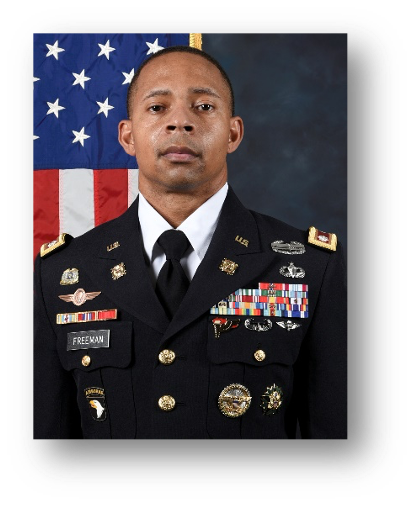 A native of North Carolina, Lieutenant Colonel Robert E. Freeman Jr. entered the United States Army on August 28, 1998 and completed basic training at Fort Jackson, South Carolina.  He received his Advanced Individual Training at the Defense Information School at Fort Meade, Maryland, and was awarded the MOS 25M, Multi-Media Illustrator.  After completing three years of active enlisted service he earned the Green-to-Gold Three Year Scholarship.  Lieutenant Colonel Freeman is a graduate of Fayetteville State University with a Bachelor of Science in Criminal Justice.  He was commissioned a Second Lieutenant in the Quartermaster Corps through ROTC in 2004.  Upon graduation of the Quartermaster’s Officer Basic Course in 2004 he was stationed at Fort Campbell, Kentucky, and served as the FSC 1/327 Infantry Battalion’s Distribution Platoon Leader.  He deployed to OIF as the Distribution Platoon Leader in 2005.  During his deployment he earned a master’s degree in Management of Technology from Murray State University.  After his Platoon Leader time her served as the FSC 1/327 Infantry Battalion’s Executive Officer.  After redeployment he served as the Platoon Leader for A Company 426th Brigade Support Battalion.  He served as the Platoon Leader for A Company until he reported to the Combined Logistics Captain’s Career Course.  He was promoted during the course to the rank of Captain on July 1, 2007.  Immediately after the completion of the Captain’s Career Course he reported to Fort Riley to attend Military Transition Team (MTT) training.  Following his training at Fort Riley he deployed to OIF as the Senior Logistics Advisor for Border Transition Team 4230.  In February 2009 he reported to 4th Battalion, 3d Special Forces Group (A) to serve as the Service Detachment Commander.  After command he immediately deployed to serve as the newly formed Special Operations Task Force Southeast S4.  After a successful deployment he served as the Battalion S4 until he was assigned to the National Capital Region as a JCS/OSD Intern.  He completed Command and General Staff College and attended Georgetown University in Washington, DC.  LTC Freeman earned an executive master’s degree in policy management.  He then worked on the OSD staff as a Military Assistant to the DASD of Military Personnel Policy.  He then served on the Army Staff as an Inspector General in the Department of the Army Inspector General’s Office (DAIG).  After his time as an IG, LTC Freeman served at the U.S. Embassy, Baghdad, Iraq, as the FUOPs ITEF Manager and Executive Officer for Security Assistance.  Following his tour in Iraq, LTC Freeman assessed and was selected to serve as the Group Logistics Officer (S4) for the Asymmetric Warfare Group (AWG).  Following AWG, LTC Freeman served as the Director of Logistics (J4) for Special Operations Command – South.  After his time in SOCSOUTH he reported to his current assignment to serve as the Professor of Military Science for Elizabeth City State University, Viking Battalion.

Lieutenant Colonel Freeman is a lifetime member of the Quartermaster Association and was awarded the Honorable Order of Saint Martin (Bronze Medallion) in April 2010.  He is the proud father of 10-year old Ravyn M. Freeman.